18 wheelers are a modern marvel which allow companies to easily and quickly transport their goods throughout the country and into both urban and rural settings.  18 wheelers became necessary shortly after Henry Ford unveiled the Model T.  Ford needed a way to transport all the cars around the country and manufactured an early type of 18 wheeler truck which could transport several cars to different locations.  From that moment on, industry changed as companies were able to use new motor vehicles to ship off goods.  However, 18 wheelers are not without their downside.  Motor vehicle accidents which involve 18 wheelers are often quite severe and may even result in the death of the other driver.  If you or a loved one have been involved in an 18 wheeler trucking accident, you may be entitled to compensation for your injuries. Contact our experienced and dedicated 18 wheeler trucking accident attorney today at (512) 580-9962. 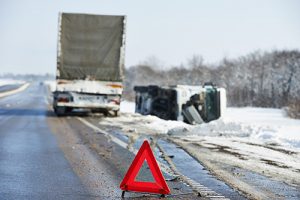 In Texas, 389 of the total statewide fatal crashes involved 18 wheeler trucks.  While this may seem like a small number compared to the total number of passenger cars involved in fatal crashes (1,500), this does not take into account the other car. Additionally, it is widely known that accidents involving 18 wheelers are more often to be fatal than ordinary passenger car accidents.

18 wheeler trucks are designed to be able to hold a large amount of goods, but are often difficult to maneuver, especially in poor weather conditions. 18 wheeler accidents can also occur on ordinary days if they are driven by an inexperienced driver.  It is difficult to maneuver and drive an 18 wheeler given the many different gears, the size of the truck, and the lack of visibility.  A new driver may not see a car in his blind spot and may move over, causing extreme damage to a car.  The FMCSA keeps a complete snapshot of a trucking company safety stats.

Injuries are often quite severe from 18 wheeler trucking accidents, and often include:

These injuries all require long hospitals stays which quickly become expensive.  As the victim of an 18 wheeler trucking accident, you may be able to receive compensation for these injuries in the form of damages for medical bills, lost wages, loss of future earnings, and pain and suffering.

If you or a loved one have been injured in an 18 wheeler trucking accident, do not hesitate to contact 18 wheeler trucking accident attorney Joe Lopez for assistance in filing your claim.  Austin Personal Injury Attorney Joe Lopez is well experienced in handling 18 wheeler cases and understands the traumatic effect these cases have on you and your family.  It is more than just a motor vehicle accident and has the potential to drastically alter your life and your future.  Contact our Austin office today for your initial free consultation.

The Eagle Ford Shale (EFS) is quite possibly the largest single economic development in the history of the state of Texas and ranks as largest oil and gas development in the world based on capital invested. This 400-mile-long, 50-mile-wide bacchanal of oil and gas extraction stretches from Leon County, Texas, in the northeast to the Mexican border in the southwest.   This rich in oil area has employees using the process of fracking to extract the oil and gas.

Fracking is the process of drilling down into the earth before a high-pressure water mixture is directed at the rock to release the gas inside. Water, sand, and chemicals are injected into the rock at high pressure which allows the gas to flow out to the head of the well.

Unfortunately, the oil boom has brought more than economic prosperity to South Texas. Truck crashes, traffic, and long commutes are now part of the daily life in the once quiet McMullen County, about 60 miles south of San Antonio.

For six decades, highway deaths have dropped steadily all across the United States. But in Texas, all motor vehicle fatalities and accidents involving commercial trucks have turned back upward since the state’s oil drilling and fracking boom began in 2008. Since then, Texas has led all states in motor vehicle deaths, surpassing California as the previous national leader, U.S. Department of Transportation records show.

More than a dozen counties have been inundated with traffic from the Eagle Ford Shale energy boom, but McMullen County has seen one of the biggest upswings in commercial vehicle wrecks. Since the beginning of the boom, accidents involving commercial vehicles have increased more than tenfold, from four crashes in 2008 to 46 crashes in 2011, according to crash data compiled by the Texas Department of Transportation.

Records show that fatal accidents increased more in counties that make up the Permian Basin and in those affected by the Barnett and Eagle Ford shale plays, where busy roads regularly fill with tractor-trailers, tanker trucks and commercial vans hauling water, workers, and supplies to oil and natural gas well sites, as well in urban counties that serve as hubs for the oilfield industry.

Why are truck accidents occurring in Eagle Shale Ford?

The eagle ford shale is located south of San Antonio and is a big region of the significant increase in oil and gas production. With the increase, small towns have seen their road torn up and ripped apart. Tractor-trailers and oil tanker trucks began using remote, two-lane highways to transport crude oil across the shale, however, these highways were originally built for small trucks and farming equipment, not large semi trucks.

Work injuries and accidents in South Texas are often fatigue related. In the oil industry, truck drivers and other employees are expected to work for 12 hours with little rest, increasing the likelihood of a serious accident caused by an exhausted driver. Truck drivers suffering from sleep deprivation are a well-known danger on the road and a risk for an increased number of injuries and accidents.

A National Highway Traffic Safety Administration report states that “Sleepiness causes auto crashes because it impairs performance and can ultimately lead to the inability to resist falling asleep at the wheel. Critical aspects of driving impairment associated with sleepiness are reaction time, vigilance, attention, and information processing.”

These fatigued truck drivers are creating a danger to themselves as well as to those whom they share the Eagle Ford Shale roadways with. As drivers strive to meet deadlines, speeding, reckless driving, and tired driving become a greater threat to other motorists on the road.

Traffic deaths surged in Texas oil regions in 2014, including 272 people who died in traffic accidents in the Eagle Ford. This is an increase of 13 percent over 2013, where 240 people were killed in the region, according to the Texas Department of Transportation (TxDOT).

Overall in the Eagle Ford last year, there were 3,658 traffic accidents in which people were killed or seriously injured, up from 3,446 the year before. This is a high percentage of the 8,600 accidents reported statewide.

Motor vehicle accidents involving large trucks including semi trucks, 18-wheelers, tractor-trailers, big rigs and single unit trucks can weigh more than 10,000 pounds and have a higher fatal accident rate per mile traveled than passenger cars and trucks. When a car and semi-truck collide, more than likely, the occupant of the car will be the one who suffers serious injuries, disability, or death. According to the National Highway Transportation Safety Administration (NHTSA), in 98% of the accident cases in which there is a death when a semi-truck and a passenger vehicle collide, the person killed is an occupant of the passenger vehicle.

The severe, debilitating and permanent injuries that arise from auto accidents with trucks, tractor trailers, 18 wheelers and semi-trucks result in significant financial losses to the individuals involved and their families. However, the law provides an injured person with the right to recover his or her damages from the responsible party.

Such damages include, but may not be limited to, medical expenses, lost wages, funeral expenses, and other economic losses. Individuals are also entitled to recover for the pain and suffering caused by their injuries and treatment. The spouse of the injured person is entitled to recover for the loss of consortium or services of his or her spouse. Although a monetary recovery can never repair the damage that is done to the individual, it can at least ease the financial burdens created by the car accident.

An injury case involving an accident with a semi-truck or 18-wheeler will present some unique issues. Semi-truck operators must follow a number of federal and state regulations and are required to carry insurance with higher limits than standard vehicle drivers. Additionally, parties other than the semi-truck driver may share financial responsibility.

Broken or fractured bones are common injuries in Texas 18-wheeler accidents. Typically, the human bone is strong enough to withstand an impact. Sometimes, however, when a strong enough force hits the body, there are times when bones are unable to endure the sheer force of impact. Under these circumstances, a fractured or broken bone is likely to result.

Closed head injuries, ranging from mild concussions to traumatic brain injuries, are another common injury. These often occur when the head makes direct impact with some part of the vehicle. When airbags go off, the high impact nature of collisions can cause head or brain injuries as a result of making contact with the airbag.

When a semi-truck accident is very serious in nature, victims can often lose limbs as a result of being trapped in compromising positions. Injuries of this nature may lead to partial or full amputations.

Back and Neck Injuries

Injuries to the back and neck can often leave accident victims in serious and debilitating pain. Less serious neck injuries include whiplash and neck strain, while severe cases can include disc replacement, spinal dislocations and fractures, strains and sprains, or any number of other conditions of the neck and back.

Any damage to the spinal cord which results in the loss of sensation or motor control is classified as a spinal cord injury. The severity of this type of injury usually depends on the location of the damage. Some of the most common types of spinal cord injuries include:

Burns are a common consequence of semi-truck accidents in Eagle Ford. The friction caused by contact with moving parts in the car or the roadway itself can leave victims with serious first, second, or third-degree burns on their bodies. Oil fires can also result in serious burns.

Texas and federal laws mandate that truck drivers must undergo rigorous training and meet specified qualifications. They also govern the amount of time that drivers are working, and several other protocols concerning vehicle repair, regular maintenance and inspections, and insurance coverage. Unfortunately, these mandates are not always fully observed.

Federal laws impose rigorous requirements on semi-truck drivers regarding the amount of time they are allowed to drive at any given time. No driver of a property-carrying vehicle may drive or be permitted to drive:

The defense lawyers of the trucking and insurance companies will begin immediately. Therefore, you should not delay in contacting our office. Defense lawyers for the trucking insurance companies will work hard to limit their liability. They generally challenge every aspect of evidence in the case to protect their insurance company’s payout. As personal injury trial attorneys with decades of experience, we can assure you that will are prepared to fully and aggressively represent you at every stage of your case. We will document your medical expenses and the extent of your injuries and rigorously investigate all causes of liability. You need to employ an accident attorney at your first opportunity. You want as much evidence as possible to protected and not destroyed or even compromised.

If you or someone you love has been injured in an 18-wheeler commercial accident on the Eagle Ford Shale, contact attorney Joe Lopez today. Attorney Joe Lopez has years of experience helping clients receive the compensation they deserve. Call us today at (512) 580-9962.