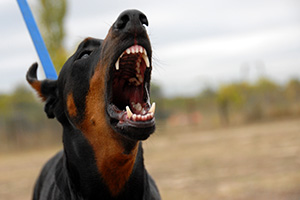 Dog bite injuries and dog attacks are often in the news due to the devastating injuries they frequently leave behind.  Texas cities such as Austin and Houston follow leash laws, which require dogs to be on a leash if they are outdoors.  Even in dog-friendly cities such as Austin, it is amazing how many people let their dogs roam in their neighborhoods with the knowledge that they may pose a threat to children or other adults.  If you or a loved one have suffered a dog bite, contact Austin Dog Bite Attorney Joe Lopez Law today.

The state of Texas follows a “one bite rule” regarding dog bites, which was implemented in 1974 after a dog attacked a person walking by after escaping from its pen on a neighbor’s property.  While the dog had threatened the victim and the victim’s wife on numerous occasions and penned them in small areas, the court found that he was not at fault since he was only left with an option to remain a prisoner in his house or to run to his car.  The court relied on the “common law” of Torts which make a person liable for the actions of their domestic animal.  Therefore, a victim can recover compensation for any injuries caused by the dog attack if one of the two following conditions is met:

The dog owner will frequently try to present various defenses against the dog bite, such as the “assumption of risk.”  This defense typically fails due to the Restatement (Second) of Torts, which states that assumption (or acceptance) of risk is not voluntary if there is no reasonable alternative.  Often, a victim is penned up and must make a run for it in order to escape a dangerous dog.  Additionally, if the dog was dangerous enough to “pen” up a person, the owner should be well aware of this dangerous propensity and should have taken steps to ensure the dog would not get away and cause this behavior.  If you have been mauled by someone else dog, call Austin Dog Bite Attorney Joe Lopez.

If you or a loved one have been attacked or bitten by a dangerous dog, do not hesitate to contact the Austin Dog Bite Attorney at Joe Lopez Law.  Joe Lopez has years of experience in defending clients against the scars left by dangerous dog attacks.  Dangerous dogs are allowed free reign far too often and this often results in severe injuries, most often to children who do not understand the temperament of other dogs.  Contact our Austin personal injury lawyer today for your initial free consultation and we will help you determine whether you have a claim against the dog owner.